One thing I do miss about not eating eggs are the breakfast sandwiches. Maybe it is because I grew up in New Jersey, but there is something appealing about a bacon, egg and cheese on a hard roll. But, these days all I am usually left with is, well, the roll.

This morning I tried something different. I took my typical brreakfast skillet potatoes, a slice of vegan cheese and put it on a vegan-buttered roll.
O-M-G … so delicious!
I didn’t crisp the potatoes as much, so they were a bit mushy, and combined with the other vegetables, it had a texture similar to that of a regular breakfast sandwich. The thought behind this came from remembering my grandmother always making potato, pepper and onion or egg pepper and onion sandwiches, so I figured, why not just leave out the egg.
A handful of spinach adds some leafy green protein to this dish, which is pretty heavy on carbs. But, the beauty of this is that you can pick exactly how much of each item you want, so you can add more veggies and subtract some potatoes.
You can make this gluten free by using a gluten free roll, but for the once-in-a-while I eat this, I prefer a nice fresh-baked hard roll from the Lake George Baking Company. 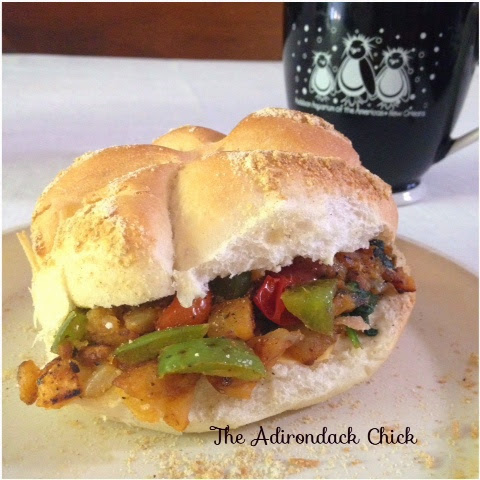 frozen diced breakfast potatoes (sometimes called O’Brien, or Southern style) chopped green pepper chopped yellow onionhalved cherry tomatoesfresh baby spinachvegetable oilpaprikafresh ground cracked peppersea saltvegan cheese (I use Daiya because it is soy free)
Fresh hard rollvegan butter (I use Earth Balance soy free)
In small pan heat the oil. Then, add the potatoes, peppers and onions.
Season to taste with salt, pepper and paprika.
Cook just until the potatoes get soft and add in the tomatoes.
Once the tomatoes begin to brown, add in the spinach.
Spread inside of the hard roll with vegan butter and slice of vegan cheese.
Once the vegetable and potato mixture are at a desired softness, put on the roll and enjoy! 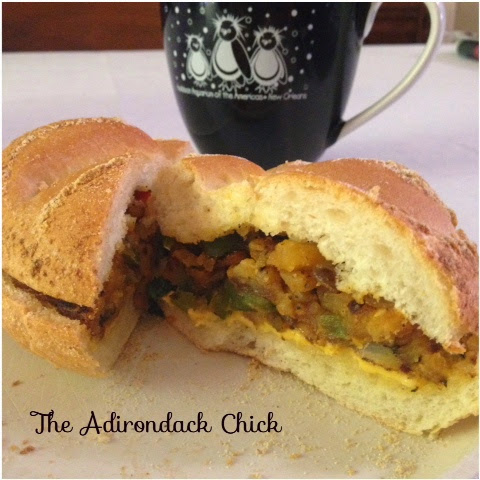 One thought on “Vegan, Soy-Free Veggie and Potato Breakfast Sandwich”