I think I might be the only person in the world who has never had this dish until I made it a few weeks ago. I say this, because as soon as I posted it, people went nuts saying how much they love Portobello  Parmesan. In fact, one person said their wife had just made it for him that night.

The thing I like best about this dish is that I can make as little, or as much, as I like. You can also use whatever size mushrooms caps you want. So, for myself, I bought a package of slider sized ones and made two of them. But, when I have people over, I can make an entire package of them.

So, it’s a very customizable dish. 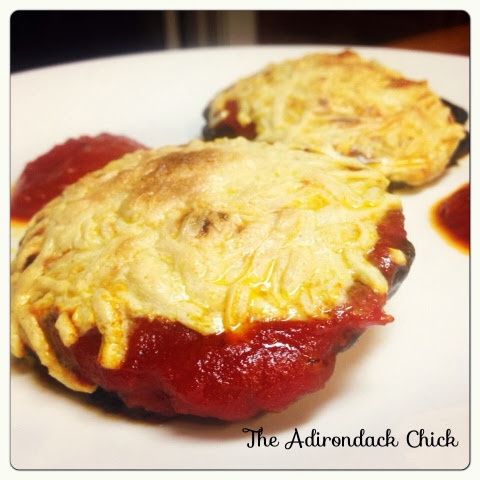 Vegan, Gluten-Free Portobello Parmesan
by Michelle Maskaly, The Adirondack Chick
Portobello mushroom caps
Tomato sauce
Daiya Mozzarella style shreds
Olive oil
Brush the portobello mushroom caps on each side with olive oil and steam until soft.
Remove and place mushrooms caps on a baking dish. Generously cover with tomato sauceand mozzarella   shreds.
Place under the broiler until the cheese gets browned and is melted.
Enjoy!