In July I went to New Orleans for the first time with about 30 other sorority sisters from across the country. It was the first time I was there and it was so much fun!

I’ve been meaning to write more about NOLA, and I will, but regular readers of this blog know I love “everything local.” So, while I was down there I bought a bunch of various New Orleans spices and seasonings. Some of which I found out you could buy at the local supermarket…but whatever  😉

Last night I tried New Orleans Gourmet Salt-Free Seafood Pasta Seasoning. The directions called for crawfish or shrimp, but since I don’t like either if those, I used scallops, and it came pretty good. There was not much direction – the package listed what you needed to put in and then said to cover until it got thick and serve over pasta.

About 45 minutes later… it was finally done! The scallops were super soft from soaking in the half-and-half, butter, seasonings, water and lemon juice for so long. I paired it with the Adirondack Winery’s Serene White and homemade garlic bread.

Purchasing something on vacation, like this seasoning packet, that I could make whenever I wanted was a nice little reminder of how much fun I had with my sisters in NOLA, (and reminded me I really need to write our trip!)

Here are some photos of dinner, and a group shot from New Orleans! 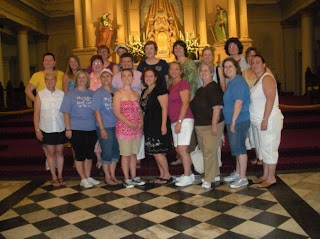