Saratoga Springs is one of those cities that has a little bit of everything all meshed into one. I don’t get to spend nearly as much time as I would like there. There are tons of little shops and restaurants that until last week I thought was only on Broadway – the city’s main shopping area. Boy was I wrong.

On the suggestion of a sorority sister who I was meeting for the first time ever, we went to Gotchya’s – a small off-the-beaten-path restaurant and bar on Beekman Street in the city’s arts district. (I didn’t even know they had an arts district!)

It was excellent. Even with a slight cold, the food was amazing.

Being partly Italian and a vegetarian I love eggplant parmesan, but it also means I’m extremely super picky about it. Their  version — next to mine and my aunt’s  — is the next best I’ve had, and I’ve had it in a lot of places all over the country.

They serve the thinly sliced and perfectly breaded pieces over pasta and then cover it with mozzarella. It was excellent. I paired it with a glass of house pinot noir.

The ambiance — dimly lit lights, local flare, bare wood and interestingly patterned lamp shades — makes you feel like you are in an artsy West Village cafe. According to the restaurant’s Web site the building is rich in history, and those such as Al Capone and Walt Disney have been to the location.

Locals tell me the restaurant has been a stop for famous chefs, celebrities and actors, especially during track season, when people from all over the world descend on Saratoga to watch world-class horse racing.

There is also a bar where you can order food, as well as specially made drinks.

This is a place I will be going back to, and worth checking out if you are in the area. Be warned though, parking is a bit difficult, so if you have reservations give yourself extra time to find a place to park.

I’m normally not shy about snapping a photo in a restaurant, but I felt a bit weird in this place – so here is a photo of my generous portion that I took home with me! 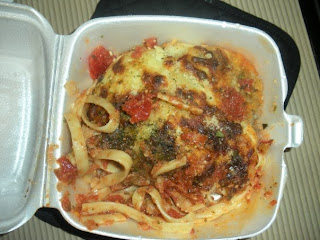 2 thoughts on “Gotchya’s in Saratoga”